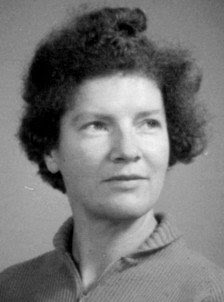 More than fifty years after Janet Frame wrote them, the short stories "A Night at the Opera" and "Gorse is Not People" have in 2008 been published for the first time, in the venerable NEW YORKER magazine.
Frame devotes a chapter in the second volume of her autobiography An Angel at My Table, to the story of her writing of "Gorse is Not People" (and some other stories and poems) on a second-hand Remington typewriter in her attic room while working as a live-in waitress at the Grand Hotel, Dunedin, in 1954. The editor of the literary magazine Landfall rejected the superbly written "Gorse" on the grounds it was "too painful to print".
Both stories are indeed painful, drawing from her experiences and observations of the hidden world of the locked wards of mental hospitals, where society's rejects and failures, and those who just didn't fit in, were dumped.
It has been a great privilege for me to be involved with the coming to light at last, of these two heartbreaking but beautiful stories. Janet was far ahead of her time in criticising the casual brutality of the NZ psychiatric institutions of the 1940s and 1950s. The material is not only piercingly poignant, it also exposes a culture and a philosophy that was due for dramatic reformation.
As she says in her autobiography of the conveniently forgotten residents of the hospital back wards, "It was their sadness and courage and my desire to ‘speak’ for them that enabled me to survive".
These stories indeed speak, both in human terms and as literary treasures. If you haven't seen them yet, they are archived online:
A NIGHT AT THE OPERA June 2, 2008
GORSE IS NOT PEOPLE September 1, 2008 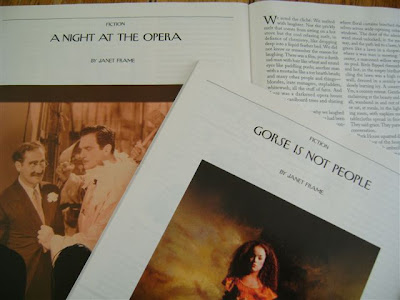 It may be of interest to note that these stories are not the first of Janet Frame's to appear in the pages of the NEW YORKER. In the 1960s she published stories in magazines such as the New Yorker, Harper's Bazaar and Mademoiselle, and she even fictionalised an account of the boost such publications could give to an impoverished author:

-You’ve another book coming out soon?
-Yes, in summer. It’s hopeless. And there are some stories.
-You’ve had some in the New Yorker?
-Yes. I’ve been living on the proceeds for the last year. They pay - they pay a huge sum, quite out of proportion-

She could see that Philip was waiting for her to name the sum, but she was shy of doing so - how could she explain that she had been ashamed and embarrassed (pleased too) at being paid so much for a few hours’ work when a complete book was rewarded by a tiny spurt of royalties as useful as toothpaste forced from the end of an almost empty tube.

-- from Towards Another Summer (written 1963, published 2007)
Posted by Pamela Gordon