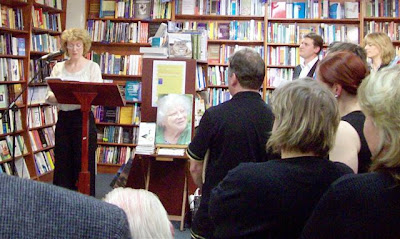 Heather Bolton reading at the Australian Goose Bath launch
Most New Zealanders have Australian cousins, and the relationship between our two nations is certainly a close one. I've just spent a pleasant almost fortnight in Australia during which time I attended the launch in Melbourne of the Australian Edition of The Goose Bath.

The launch was held at Readings bookshop in Lygon Street on September 17th and was jointly hosted by the publisher Andrew Wilkins of independent boutique publishing firm Wilkins Farago and the New Zealand Consul-General Shona Bleakley.

There was a warm and welcoming crowd of Kiwi expats and Melbourne literati, along with friends and colleagues and fans as well as curious bookshop patrons. The atmosphere was great - partly thanks to the generosity of Montana Wines and Whitestone Cheese. Shona and Andrew spoke, and I also addressed the audience. They seemed to be amused when I told them that sometimes I imagine my aunt on my shoulder, sharply reminding me not to forget, when I am enjoying all the fuss for this beautiful book, that SHE was the one who had written the poems in the Goose Bath!

Those present were given a special treat: an intelligent and illuminating reading of some selected poems from The Goose Bath by Heather Bolton. Heather is a Kiwi actor now resident in Australia who has already demonstrated her outstanding ability to interpret Janet Frame's work in the Bolinda audio book production of Owls Do Cry released earlier this year. That title has already won a 2008 AudioFile Earphones Award. The focus of these awards "is the audio presentation, not the critique of the written material. EARPHONES are awarded to truly exceptional presentations that excel in narrative voice and style, vocal characterizations, appropriateness for the audio format, and enhancement of the text." I really enjoyed hearing Heather's interpretations; even though I knew the poems well already, I felt that new subtle shades of meaning had been brought out for me by her sensitivity and professionalism.

Heather has also done the reading for the newly released Bolinda audio book of Towards Another Summer and I'm looking forward to hearing that. As an expat I'm sure she was easily able to identify with the meditations on escape and exile that predominate in that work.

We rounded off the formal part of the evening with an audio clip of Janet herself (recorded about a year before her death) reading "The Icicles" which is an astonishing poem that has emerged as one of the top choices so far for anthology editors.
The event was about celebrating poetry itself as well as Janet Frame's poetry, and it was great to be part of such an enthusiastic gathering.
Earlier that day Andrew Wilkins and I spoke to Ramona Koval for the ABC Book Show (click on the link to hear a podcast).
The Goose Bath had already starred in a couple of newspaper articles before the launch. In a feature for the Sydney Morning Herald (August 30-31 2008) Angela Bennie said:

Throughout the volume, Frame's voice comes through: strong, powerful, idiosyncratic, whether in grief or joy. Images recur from one poem to another, as do colours, sounds, ideas and patterns of language, deliberately so, creating the impression that the poems are talking internally to each other as much as outwardly to a reader.

The richness of content and her sense of the natural world delights. She writes about mathematics, other poets, music, sex, family and childhood. And when you think you have her taped, she surprises with an audacity that takes the breath away ... This is a living, breathing volume of the best of her uncollected poetry, an elegant selection that constitutes part of a very decent legacy indeed.