A Study of John Money 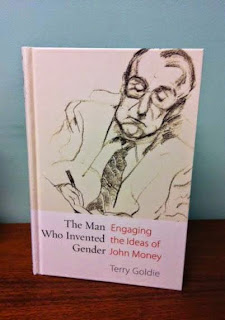 The Man Who Invented Gender: Engaging the Ideas of John Money
by Terry Goldie
University of British Columbia Press (2014)
This sounds like an interesting and well-researched book about the controversial figure of John Money who was an intimate friend of Janet Frame's. He was influential on her early career trajectory and they remained close friends until her death.
From the publisher's web site:

In 1955, the controversial and innovative sexologist John Money first used the term "gender" in a way that we all now take for granted: to describe a human characteristic. Money’s work broke new ground, opening a new field of research in sexual science and giving currency to medical ideas about human sexuality. An ardent advocate for sexual liberation, he became something of a fixture in the popular imagination, giving expert testimony in court cases and being featured in Life and Playboy magazines.

Terry Goldie seeks to cut through Money’s talent for controversy and self-promotion by digging into the substance of Money’s theories and achievements. He offers, for the first time, a balanced and probing textual analysis of this pioneering scholar’s writing to assess Money’s profound impact on the debates and research on sexuality and gender that dominated the last half of the twentieth century. Goldie reconsiders Money’s work and influence, paying specific attention to his work on intersex, transsexuality, homosexuality, pornography, and sexual liberation. Through his analysis, Goldie recovers Money’s brilliance and insight from simplistic dismissals of his work due to his involvement in the tragic David Reimer case, while never losing sight of his flaws.
Posted by Pamela Gordon