Canon Fodder: a response to a paper by Jane Stafford


Stafford implies that she and her co-editor Mark Williams had ‘much correspondence’  with Frame’s estate. They did not. They made no direct approach to the Janet Frame Literary Trust (the legal entity responsible for Frame’s copyright), leaving Auckland University Press staff to mediate negotiations. Stafford in her apologia states that:
‘In the end, after much correspondence, intervention on our behalf by others, and our offering entirely new selections, including one which had an almost exclusively Frame section (something entirely at odds with the way in which the rest of the anthology was organised), we felt that we were unable to represent Frame in a way that was appropriate or adequate to her work’.

That the editors were ‘unable to represent Frame in a way that was appropriate or adequate to her work’ is something that the Frame executors can agree on! Stafford goes on to say that ‘In retrospect we do see ...  our selections did ‘read’ Frame in a particular way’. But she does not seem to see anything wrong with that. The editors’ prime selection criteria for their anthology was not quality but the suitability of an author’s work to fit into their theoretical framework: ‘we believe that literature is seen at its most interesting in context ... authorial brilliance was not our first concern’.


This of course conflicted with the Janet Frame estate’s own agenda, which (happily) is very much concerned with authorial brilliance, and with the author’s reputation and the integrity of her body of work. Quite apart from their desires for the rest of their project, the editors of the AUP anthology had constructed a flawed and unbalanced de facto ‘canon’ of Frame’s work, that we the estate knew from our wider experience of non-academic publishing was likely to be extracted from much of the rest of the anthology, especially internationally, where Frame is one of the few New Zealand literary names known, and where reprints of her work can command market prices. The publisher was seeking international digital rights along with carte blanche for the formulation of subsets of material from within the anthology for unstated purposes and within undeclared contexts. We could not allow this inadequate Frame corpus of over 12,000 words, weighted heavily towards her early career, to represent Frame’s output over her entire career. At that stage our concern was not with the major flaw at the heart of the AUP Anthology, later identified by numerous critics: that the book which claimed on its cover to offer the best New Zealand writing (‘our guide to what’s worth reading – and why’), was in fact not selected with the ‘best’ work in mind, but rather selected because they were the best pieces to showcase [the editors’ view of] New Zealand’s sociological and historical makeup. Our concern was as it should be (by definition) for a responsible literary estate, to agree on an appropriate and high quality and representative range of Frame’s best work. We did attempt to be generous and flexible but this was not appreciated. The editors did not seem to want Frame in all her glory – they wanted her as a muted and submissive wallpaper ‘to add lustre’ to the new generation (consisting largely of staff and alumni from their own university) - but not to challenge or outshine it.


The ‘intervention on our behalf by others’ instigated by the editors consisted of an emotionally manipulative email sent by a friend of the editors to the trustees and an indirect approach via a family member of one trustee. Frame herself warned us while preparing us as her representatives, about such indirect approaches, and even clearly stated her own principle: you need to discourage the attempt to get to you by flattering or otherwise leaning on a close friend or family member. In that case her answer was always no. In our case, we had already said no before the attempt to rope in a family member (who, to their credit, did not really want to be involved in such business matters anyway). There was no conversation or direct communication between the editors and the trustees at any stage of the negotiation. The trustees only received each new list of proposed excerpts by email from Auckland University Press staff. 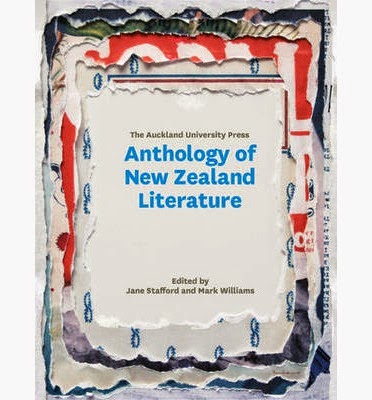 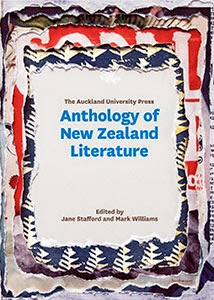 Final dust wrapper without Lagoon cover and without any texts by Janet Frame
NB: This is the first time that anyone from the Frame estate has spoken publicly about the AUP Anthology and we do it in self-defence. We deliberately remained silent at the time of publication two years ago despite unfair accusations made about us by the editors and those who believed them. We were quite sure by then that the absence of Frame from the Anthology was not the worst problem with Stafford & Williams, and we resisted the attempt of the editors to bait us into a time-wasting argument played out in the media. We did not want to fan their obvious rage against the Frame estate, or let them use us for publicity.  We were hoping to leave plenty of room for the other valid critiques that might have been overwhelmed by such sensationalist tactics. Fortunately plenty of voices were raised to acknowledge the weaknesses and failures and the other serious omissions of what seemed to us an ill-conceived project that had a basic contradiction at its heart: the publisher had a bright idea to produce a nice generous (and hopefully bestselling) anthology of the best of Kiwi writing; unfortunately this goal conflicted with the editors’ self-indulgent plans to subvert the anthology project for theoretical reasons, and while they did produce a monstrosity that does provide in parts a thumping good read, because it does include a lot of good writers and a lot of good writing (although you can find most of that elsewhere in more palatable formats) it fails to provide all the best writers, all the genres, and all the best work, because the editors never intended that it should.
‘The signs, the traces of my feeling’: editing the Auckland University Press Anthology of New Zealand Literature, Jane Stafford, Journal of New Zealand Literature: JNZL No. 31:2, Special Issue: New Zealand's Cultures: Histories, Sources, Futures (2013), pp. 145-162

Thank you Pamela. I'd like more New Zealand analysis and discussion around issues like this, in public; and hope that people who know more about this issue than I do will respond to you.

Thanks, M.
Frank public discussion on New Zealand literary controversies is difficult because this country is so small that people are aware they may never be published by certain presses or journals again if they offend any member of the major coteries. Honest book reviewing is also a minefield for the same reason.

Concerning CK Stead's downplaying of the legal action the Frame estate took against him for serious copyright violation by publishing previously unpublished personal material without permission, there is an interesting parallel in the recent scandal in New Zealand where the complainant in a sexual harassment case was bound by a confidentiality clause but the perpetrator felt free to minimise the facts of the case in public. The guilty party made light of the actual events, claiming he was just an affectionate sort of guy, whose hugs and sexualised banter were 'misunderstood'. Stead has used similar minimising language, claiming in a NZ Listener interview that "Janet wouldn't mind" when Frame did mind about being selectively misquoted and she certainly wanted strong restrictions over any publication of letters or manuscripts.

Yes, it can be hard to debate and to review.

I sometimes hold back because I don't want to hurt people I love. I'm not sure what, if anything, would make me engage more fully in this kind of debate, as someone who has absolutely nothing to lose in the NZ scene because most of my readers are outside NZ and I very rarely submit anything for publication here. And I don't review films or books anywhere because I'd only review women's work that inspired me to think critically about a particular issue and in my experience if a woman write something critical in a context that addresses another woman's work that tends to be used against both. So it's not simple.

But you've raised so many important issues re best practice for editors of anthologies and I'd love to know how other anthologists in NZ work, including the people who developed the recent Te Ara Creative & Intellectual LIfe section. Do they start eg with Creative and Intellectual Life and seek out and read everything they can find, with an open mind? And see what happens to their thinking? Or do they start with fixed views about Creative and Intellectual Life and hoover up what fits with those views? Probably different anthologists do it differently at different times. But I think there's also a kind of conditioning that goes on here, over decades. There's 'talking up' too. And there's spin. And I suspect that it's time that lots of us took a fresh look at Janet Frame's contributions to New Zealand writing, took her out of the box(es) she seems to be in at the mo.