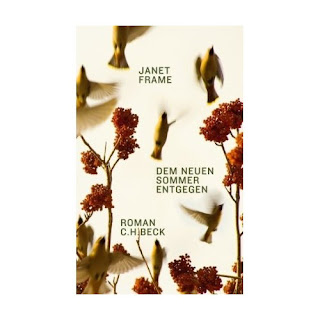 The German translator of Towards Another Summer recently featured in a news report in Badische Zeitung, involved in a women's literary event at Freiberg on the theme of Janet Frame. There's a lovely photo (if you click on the link) of some happy smart women gathered to celebrate books in their life. It's a universal language, the joy of the book-loving woman!

The news item seems to claim that Janet Frame's writing had become known in Germany only after the 1990 film adaptation of her autobiography, which is a shame because Germany was actually the first foreign country to discover and translate Janet Frame in the early 1960s and German editions of her work have been well received over the years. Certainly Janet Frame hit a much wider readership in Germany and elsewhere through the accessibility of her three-volumed autobiography written in the 1980s, but long before the film made her even more famous, Janet Frame's reputation had already been high among readers of quality literature and her work was also a well established topic for academic study.

The hauntingly poignant posthumous novel Towards Another Summer, with its themes of homesickness and exile has really touched a nerve since its publication last year in Germany, and it has received rave reviews, was reprinted, and sold so well a second edition of Dem Neuen Sommer Entgegen has been published this year in paperback.

New Zealand has been named as the guest of honour for next year's 2012 Frankfurt book Fair and so as the two countries enter their year of literary communication and exchange one hopes that both from the New Zealand and the German side of the encounter that the history of Janet Frame's reputation in Germany will be given its due recognition and that the wikipedia-lite myth-making will be kept to a minimum!