From Seacliff with love 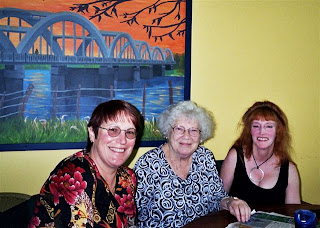 I was saddened recently to farewell my dear friend Juanita Ketchel (pictured above with me and Janet Frame in late 2003, accompanying us on Janet's last public appearance at the opening of the John Money Wing at the Eastern Southland Art Gallery). Juanita had been since 1972 accepted as a  treasured member of my wider extended family (at one stage we coined the term "sister out-laws" to describe our relationship).

In 1973 Juanita and some other family members moved out of Auckland and settled at the little seaside village of Seacliff north of Dunedin, where they were based for many years. Now naturally, as one does with people who are close, I wrote to and received letters from the Seacliff branch of the family, and visited and stayed with them. This presented a problem for my famous aunt, for whom 'Seacliff' (where the notorious mental hospital had been located, where she had been misdiagnosed) was still a name that carried a shock of terror with it. Although Janet wanted to hear news about the people who had moved there (my in-laws and out-laws), she didn't like hearing the name of the place where they lived. I remember her asking me not to say the word "Seacliff" around her - I guess that it could trigger flashbacks of the abuses and torments she suffered there, having been mistreated and abused. I supposed she suffered a form of post-traumatic stress after having experienced the use of shock treatment as a punishment.

In fact, knowing what I do now, that even her so-called 'mentor' Frank Sargeson was ready to throw Janet Frame back into hospital in 1956, and that she had fled New Zealand in genuine fear of being locked up again, then I don't know if we can call her fear "post" traumatic stress. Janet Frame knew well how your society can turn on you, and she was afraid of falling into the clutches of narrow minded bullies once again. The Seacliff hospital seemed to stand as a symbol for her that she wasn't safe in her home country. (How right she was, I think now, and I am glad she isn't here now to hear the way the mythmakers have turned full circle and are pathologising and mislabelling Janet Frame once again, lauding the malicious gossip of Frank Sargeson as revealed in his recently published letters, as if there had been no social progress or enlightenment ever in this stagnant little country).

"I have been in great personal danger in New Zealand. I have been in danger of being destroyed by people who decided it was their right to try to make me what they wanted me to become - and this without any detailed scientific or human investigation of me. Do you wonder when I say I'm not completely at home in New Zealand."
~ (Janet Frame In Her Own Words, Penguin 2011:119)

But eventually Janet had to come to some form of acceptance of 'Seacliff' not just as a memory of horror but also as a place  of love and life and joy, a beautiful place to live, not just because Juanita and the others lived there, but because in the late 1980s I myself also moved to that district and as Janet and I were always in constant communication by letter or phone, gradually the mention of "Seacliff" seemed to lose its power to chill her. However the first few times she was invited to visit or stay, and even to come on a tour of the now abandoned hospital, she used to say, Do you think that the survivors of the concentration camps ever want to go back and look?

Of course eventually Janet became sensitised enough to Seacliff to visit and she even stayed a few days at our house in the village, and allowed us to drive her up past the scene of the crime. She enjoyed the beautiful coastal views and marvelled at the delightful little "Mount Charlotte" which she didn't remember ever seeing from wherever she had been incarcerated within the hospital grounds.

Rest in peace, Juanita, and thanks for Seacliff and so much else.

Posted by Pamela Gordon at 2:12 PM No comments: