Patrick Evans and the Bone People 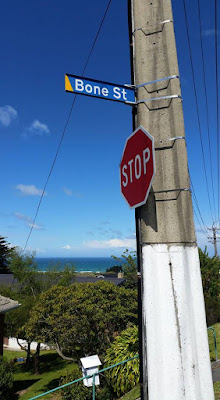 The view from the corner snug at Shiel Hill Tavern, Dunedin

During the last years of her life, Janet Frame had returned to live in Dunedin, the city where she was born. One of her favourite lunch spots was Pumpernickels, a bistro restaurant located at the Shiel Hill Tavern on the approach to Otago Peninsula, set high above the Pacific Ocean, overlooking Tomahawk Lagoon and with a sweeping view to the south down towards St Kilda and St Clair beaches. There was a kind of semi-private area leading off from the main restaurant, down a few steps. It was a windowed corner 'snug', where Janet and her friends and family always sat, enjoying the view and the relative privacy. 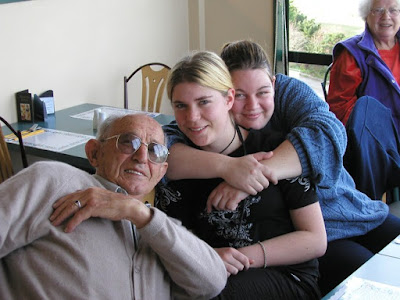 
Picking over the bones

Imposing on the fine view from the glassed corner room was a telephone pole bearing the name of the road that bordered one side of the pub: Bone Street. You couldn't miss it, and almost every time we dined there, usually after lunch, Janet would lean back, sigh, and say "Bone Street. I wonder if it is named after the Oamaru Bones..." and then the conversation would almost always turn to the fact that her loathed nemesis the academic Professor Patrick Evans did not believe that Janet Frame had really gone to school with a girl named Nora Bone. "Patrick Evans thinks that I made up Nora Bone," she would say.

Here is an excerpt in which Patrick Evans fantasizes publicly that Janet Frame had deliberately set puzzles in her texts, to fool and deceive readers, and that she would somehow be delighted that Professor Patrick Evans himself had personally had been tripped up:

How she would have loved the moment when I detonated another of these little linguistic mines that she liked to bury in her text for unsuspecting readers, this time in To the Is-Land, where she gives us a wretched schoolgirl so friendless that she was willing to turn the skipping-rope in the playground without ever expecting a chance to skip. Her name? – why, Nora Bone, of course.
Wait a minute, wait a minute, who does Frame think she’s kidding? Nobody’s called Nora Bone – what kind of parent would – hold on a minute, though (by now I was in the Oamaru phonebook), it seems like there’re quite a lot of people called Bone in Oamaru . . . maybe there was . . . no, there can’t’ve been . . . but how could she be called Nora Bone, isn’t this one of Frame’s tricks, doesn’t it tie in with all the bone imagery in the first volume? In the end (it’s not easy to confess this), I was reduced to writing to every single family named Bone in the Oamaru phonebook to ask if they had a relative called Nora Bone … I just had to know, I couldn’t rest. I still don’t know, I still can’t rest, because not one of The Bone People replied.

In a piece he called 'Dr Clutha's Book of the World' (JNZL 2004) Patrick Evans repeated and elaborated on his delusional idea that Janet Frame was somehow attempting to deceive him personally by inventing the name Nora Bone:

And how especially delighted she would have been, given my early intrusions on her privacy, to see me tripping over the name of the classmate she presents in To the Is-Land as the only child dirtier than her: “Nora Bone”—an impossible invention, of course, obviously named deliberately to draw attention to the madeupness of the text and to link with the motif of bones that recurs throughout that volume; except that a flick through the Oamaru phonebook revealed that there were several people called Bone listed in it . . . the hours I then spent brooding over this, and over whether parents could be so cloth-eared as to christen their child Nora Bone, were hours in which Frame held me captive and as she would have wished, her ideal reader at last, a simple shrivelled fly struggling in the web of her art. And had she known that in the end I cracked, and wrote to each of Oamaru’s Bone People in turn to ask them if they had a daughter called Nora (and how I wish now that I had told her this)—why, her delight could have been exceeded only by knowing that, in the end, not one of them replied. Sucked you really badly, as we used to say at primary school—but then, in the next volume of the autobiography, she is at it again: “Mother’s health had improved under the care of Professor Smirk of Dunedin” (1989: 225). Professor Smirk? The Dunedin phonebook, this time...

The attitude that underpins Evans's response to Frame's texts is his belief that Frame is a liar and that her autobiography is an artifice designed to hide some dark truth only he seems aware of and that he is determined to unearth. He seems to have always had this hostile response to Frame.

He triumphantly points to the seemingly unlikely name "Nora Bone" as some sort of evidence that her meticulously written and substantial 3-volume autobiography is "made up".

Patrick Evans repeatedly claimed while she was alive that you could learn more about Janet Frame from her fiction than from her autobiography. No wonder she detested him. Maybe Evans had to take this position because he had been humiliated by the multiple errors he had made in his own substandard efforts to write an early 'biography' of Frame. Perhaps he thought that if he continued to accuse Frame of evasion and deception, that his own flaws and errors and insulting speculations might not be rejected so easily by his colleagues.

In fact I know that Janet Frame didn't, as he liked to imagine she would, "love the moment" and she wasn't "delighted" by his response to the name Nora Bone. I know because Evans had told this stupid story for years and written about it, long before her death, and the story had reached her. The story of Patrick Evans and the Bone People had indeed became a recurring joke for Janet Frame's inner circle: a symbol of how creepy and offensive he was.
"He thinks I'm laughing at him," she would say, sitting at the window of the snug and looking past the Bone Street sign out towards the horizon. Somebody else would point out that we were laughing at him, for not believing in the name Nora Bone. Then we would all laugh again, and start thinking of other improbable names that people really did have. Like Frame, for instance. And Nora Barnacle. What we were laughing at, was at how he always seemed to miss the point of her writing so completely.

Janet Frame did not find Patrick Evans amusing. She was horrified by his intrusive speculative fantasies about her life and she thought of him as a stalker. She was particularly repulsed by the fact that he had, in his literary criticism, expressed suspicions that she had been sexually abused or even raped, and he claimed that she had left clues to this effect in her fiction.

In 'The Case of the Disappearing Author' (Journal of NZ Literature 11:11-20, 1993) Patrick Evans says of her autobiography: "She leaves a vacuum which we fill with what we desire her to be." A three-volume autobiography - one of the world's finest, according to many commentators - is a vacuum? Only if you are only projecting your own pathological obsessions onto it. Elsewhere in the essay, he calls Frame "a blank space on which we are able to read whatever we wish". This stance is sexism exemplified. The woman is merely there to be defined externally. No matter how much she protests, the man - the academic man -  knows better. "The act of disappearance implies that there are things that require concealment," says Evans. Again, it seems mind-boggling that one of the most frank, generous and revealing autobiographies in the history of New Zealand literature, can rationally be described as an act of "concealment".

But Patrick Evans is only now getting to the point of the case he is building with his misrepresentations. "The more she talks of her honour, the more we count our spoons." Ok, so he wants us to believe that she is evasive and that she is dishonest. But why? What is his point?

And here it is: the only explanation, according to Patrick Evans, for the fact that neither Frame nor her close family and friends have tolerated his stalkerish attempts to encroach upon her private life, is that Janet Frame must be concealing an "Oedipal skeleton". Or maybe, he speculates, it was George, her brother, who is the source of the dirty secret that Frame must be hiding, behind what he suggests to have been the "family violation of children".

"He is wrong," Janet Frame said. She said it to me, and she said it to Michael King. She was never raped. Her brother did not abuse her and nor did her father. She rejected all those notions vigorously and her opinion about Patrick Evans was that he was a very creepy person.

She was right. He is. After she died, and no longer inhibited by defamation law, Evans turned to fictionalising his sick fantasies about Frame. It's a scandal of contemporary New Zealand literature that his allies and enablers have since Frame's death been supporting Patrick Evans in his pathological desire to insert himself into Janet Frame's canon as a form of literary rape:

"I always wanted to write a book by Janet Frame. I've taught her for ages and I knew there was an unpublished book, Towards Another Summer, so I planned to write that and smuggle in a fake Janet Frame novel into the canon."
However, his literary plot was foiled when, in 2007, the Janet Frame Literary Trust offered the author's autobiographical novel, written in 1963, to publishers.
"I had to regroup when they published the real one as I was busy writing my fake one."