Enough already with the Chicks and Toby 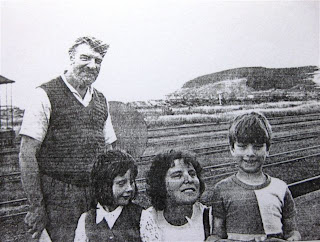 June Gordon pays a friendly visit to Oamaru to see her brother George Frame and his children
For my sins, I have been reading some contemporary Frame criticism, and I have been shocked to discover that there are still some people out there who obtusely equate members of Janet Frame's family with her fictional characters. Specifically, the Toby and Chicks of Owls Do Cry are conflated with Janet's brother George and her sister June. This despite the author's frequent protestations: for example, see the previous post where Janet Frame is quoted at the very moment of publication of her first novel - in 1957 - vehemently denying the suggestion that it is "autobiography". She even clarifies that her "Toby" is a much less bitter person than she believed her brother to be, and that her only surviving sister is completely unlike her "Chicks", which she explained elsewhere, was a deliberately drawn negative portrait of a vain and materialistic housewife. Anyone who knew my left wing, politically idealistic and rather other-wordly mother knew instantly that to insist on the comparison between her and "Chicks" was not just a slander, it was stupid.
The persistence of the belief reminds me of the well-known phenomenon of the naive viewer of a soap opera or film who mistakes the actor for the popular character they play (or vice versa!) and when the actor is seen out on the street, it is as if the celluloid image has taken on human form. Actors do get used to this. A young New Zealand actor who rose to prominence playing a Russian immigrant in the local drama Outrageous Fortune, is now playing a native-born Kiwi in a home-grown soap opera, and is apparently regularly complimented on how well she has managed to disguise her Russian accent! She has said in an interview that she has learnt not to bother insisting that it was the European accent that was the fake one.
My late mother June Gordon, Janet Frame's sister, continues to be misrepresented by similarly credulous soap-opera-brained "literary theorists" who even in 2011 are publishing academic papers claiming that the materialistic "Chicks" character in Owls Do Cry was a deliberately cruel - but accurate - portrait of the younger sister.
June Gordon, along with countless other candidates for the role of young married postwar woman with several children who left the provinces for life in the city, did share some but by no means all of the outward characteristics of the "Chicks" that Frame satirised.
One of the things that annoyed Janet Frame about the triumph with which certain literati trumpeted their so-called discovery of the "inspiration" for a particular character she had invented, was their patronising belief that they had any insight into her social circle and her experiences. Their assumptions that her circle was so narrow that they knew all the people she could possibly have drawn on, betrayed their condescending attitude towards her literary skills, and their likely swallowing of the myth that she was socially incapable.
Frame consistently denied that there was any correspondence between Chicks and June other than the kind of background detail that every novelist has to borrow from somewhere, which they do, perhaps unthinkingly at first, not expecting paparazzi to come snooping through armed with discarded toys and faded old family photos and half-remembered anecdotes, trying to fit them like cardboard jigsaw puzzle pieces into an Old Master. My mother and anyone close to her recognised and accepted that "Chicks" was not at all a portrait of her, and that any blame for the mistake was squarely to be placed at the feet of the hacks who were pushing the angle for their own reasons, not the least of which was an attitude of disbelief in the ability of the author to invent a fictional world. Because the insistence that her fiction is fact does usually tend to arise from the parallel insistence that Frame's mind was so disordered that she was incapable of making the distinction. These are the commentators who also usually proceed to claim that Frame "made up" her autobiography! They then have themselves a nice tidy package, worthy of a career of fruitless unwrapping, which is starting to look to me as though it is pretty much the way a lot of English literature academics spend their lives.
The original mistake was made early out of ignorance, and multiplied often, and the scholars are still quoting and footnoting each other's inventions as if they were gospel. The flakiest and the most mediocre shore each other up and rush to each other's defence if anyone (like a literary executor!) should be so importunate as to point out an occasional fact that gives the lie to their fantasy constructs.
Posted by Pamela Gordon at 3:10 PM