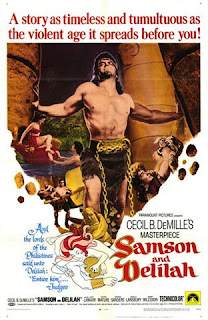 Apparently someone had identified the Biblical character Samson as autistic, using this kind of logic:

"Samson is said to have eaten a swarm of bees and honey that he found in the carcass of a lion. Abnormal eating habits have been seen in children with autism."


It really is hard for me to tell whether the article cited was satirical or not. It would seem likely, but when you consider that an "intensive peer review process" at the NZ Medical Journal gave an imprimatur to Sarah Abrahamson's identification of Janet Frame's special autistic obsession as "poetry", then you have to admit, in the world of pseudo science dressed up as research, anything is possible.
Here are some of the comments the post received from other members of the autism community:
"I hope no autism charity funded this research."
"The people who promote this idea of diagnosing autism posthumously, based on limited (and in this case, fictional) information, don't seem to realise they do more harm than good. It really does make autism look like a joke."
"What you are actually demonstrating is that psychiatric diagnoses in a cultural and historical vacuum are silly and pretty sure to be wrong. Thanks!"
"OMG Thanks for posting this. Is there a disorder for the compulsive need to diagnose dead historical and possibly mythological figures?"
Posted by Pamela Gordon at 12:50 PM

Yes, I did because diagnosing someone after their death is extremely hard to do and most likely wrong. The further you go back in time the harder it gets because there are fewer and fewer details available and no one who actually knew the person.

By the time you get back to biblical times the whole idea is rather humorous.

Although for that matter, properly diagnosing high functioning autism in living adults who are sitting in front of you is hard to do as well.

So I am of the opinion that diagnosing someone after their death is a rather pointless thing to do. The only people who seem to try to do so are ones who have a specific agenda with respect to autism. As in, autism isn't go bad, see, this great historical figure had it.

Thanks MJ. Although some medics who indulge in posthumous diagnosis obviously think they are well motivated, I believe that all they are actually doing is showing the rest of us that they are supremely oblivious to and disdainful of the rights of an individual human being to be actively involved in and to contribute to their diagnosis. This was an important point that Janet Frame devoted much of her energy to, and she would be furious and scathing of this intrusive labelling of her, when one of her greatest messages was the injustice of having been labelled without proper investigation. To imagine you can diagnose someone dead based on the few salient clues left behind - often as in any story-telling process, the most dramatic and the least 'ordinary' highlights are the ones that are told and retold - that have survived their own lifetime.

As for the hilarious original article, it was clear enough to me that it is satire, and like all good satire, it hits its target - the reductionist stupidity of posthumous diagnosis - truly.