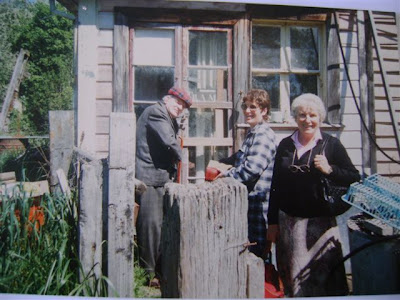 Janet Frame's brother George Frame died on the 20th of December 1989. May he rest in peace.

From all accounts, George Frame of Oamaru, Janet Frame's brother, known as 'Geordie', had a pretty bad reputation in his home town. Probably the one person who has done the most over the years to publicise a negative image of Janet Frame's brother George, is the academic Patrick Evans, who in multiple essays such as his obituary of Frame reports George to be "eccentric" and even "dangerous", "fanciful", "narcissistic", a "constant irritant", and describes him as "nasty, brutish, and short", and admits that "he scared me".

Now Frame never talked like this about her brother. She denied the salacious suggestions vehemently, and this sort of over-personal, creepily familiar and inappropriate focus on her and her wider family was why she despised Evans. A prominent Auckland literary figure (Christine Cole-Catley) reminded me recently that Janet had openly referred to Patrick Evans as a "stalker".

Evans is well known for giving undue attention to peripheral members of Frame's circle; he admits it himself, because he was spurned by Frame and her closest family and friends. In a recently published online essay about Frame's life he says:


"Her brother George's increasingly public eccentricity - later in life he regularly wore highland regalia - created further difficulties and embarrassments that continued throughout much of Janet's life, leading eventually to their estrangement." (Te Ara)

This is a typically skewed and speculative, and subjective, pronouncement from Evans about Frame. The more he obsesses about her, the less he seems to know about her. It doesn't seem to occur to him to take her own word about herself. He has to impose his own fantasy (so much so that he has recently decided to discard footnotes and research and fictionalise his Janet Frame, in order for his demeaning theories to be taken halfway seriously, or even be listened to at all.)

The quote shows how little Patrick Evans understands about Frame even now. George's wearing of highland regalia was not something that embarrassed Janet Frame by any means. She and the rest of her family were proud of their Scottish heritage. That would have been one of the things about George that Janet Frame celebrated.

If Janet Frame became estranged from her brother, it was nothing to do with embarrassment at his wearing of a kilt. It would have been more to do with his habit of seeking media attention by exploiting his family relationship to her. That was one thing she found unforgivable.

In fact, despite his harassments, Janet Frame never totally rejected George. She cared about her brother and did her duty (as she saw it) by him to the very end. She even paid for the brand new cottage he lived in for the last months of his life after his own dilapidated old shed burnt down in August 1988. (George died in December 1989.)

Janet Frame had also yielded her own share of the family property to her brother after their parents died. She took away some few mementos at that time to share with her sister June, but the large bulk of Frame family heirlooms and papers and books and photos were left with George. Much of this material was left to rot as the old house "Willowglen" up on the hill gradually disintegrated over the years. At some point, recognising the wastage, some literary pilgrims rescued a few of those papers and donated them to a Library. One assumes that everything else that George had held onto was destroyed when his hut - located down in the valley - was burnt down. According to his obituary of Frame, Patrick Evans seemed to have come into possession of some of George's keepsakes, so one hopes they have now been restored to George's immediate family, who can decide what to do with them.

*The photograph above was taken in 1986, when my parents were visiting the South Island. I was living in Dunedin by then and met with George quite a few times over the following years before his death. Like Janet, my mother had always tried her best to be a good sister to George and always kept in touch and helped him out. He used to stay with us in Auckland when I was a child. I need to put this generosity on record (in any case there is plenty of evidence for it in the King biography) because there has been public misinformation on this topic recently to the effect that my family allegedly ostracised George. Considering his difficult behaviour (including taking her hostage at gunpoint!), my mother acted in a saintly manner towards him. She always allowed for the fact he had a difficult life with bad health from a young age, and was kind and respectful towards him, even though she was clearly afraid of his tempers (I remember him shouting, when he stayed with us when I was young).

About a year after this photo was taken, George was taken ill while travelling and ended up in Wellington Hospital. My parents drove down from their home in Levin to visit him, but weren't happy to be rung by the hospital after their return with the request that George be released to recuperate at their place. This was the last straw for Mum, who had suffered many years of emotional blackmail from a brother who had learned to use his disabilities as a manipulative tool to get his own way. She pointed out that George had his own immediate family back in Oamaru (a son and a daughter) and that she did not wish to be named as "next of kin". She had little to do with him after that. In mid 1988 George's house burned down and Mum did encourage Janet in her plan to pay for a replacement home for him. Thanks to Janet Frame's generosity, George lived his last year or so in the relative comfort of the new cottage his famous sister provided for him to live in.

* Screen clip from Jennifer Lawn, 'Redemption, Secrecy, and the Hermeneutic Frame in Scented Gardens for the Blind'(ARIEL July 1999):

Posted by Pamela Gordon at 3:50 PM