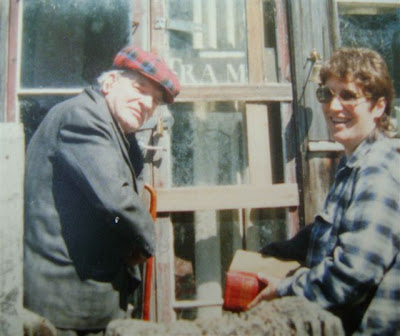 Me and George
Willowglen, Oamaru 1980s

My birthday book tells me that today is the birthday of my uncle George Frame, Janet Frame's only brother (apart from her un-named stillborn brother, and perhaps her own twin of unknown gender, who also died in utero).

I was fascinated by this man, who seemed to have alienated so many other members of my family, some of whom had even taken formal measures to disown him or keep him at a distance.

When I came to live in Dunedin in the mid-1980s I took every opportunity to meet him and try to get to know him. He visited Dunedin often, and liked to drink at my favourite coffee bar, Stuarts, downstairs in the Octagon. When I saw him there I would go and sit with him. He was quite deaf and he used to shout quite loud, and it's true that in order to be heard one had to shout back.

Uncle George was a bitter, angry and resentful man. He couldn't understand why his sister was so famous, and believed that he was also entitled to such fame, and steadfastly refused to understand that one doesn't earn accolades just by having lived through similar experiences; that the actual effort Janet had put in was what earned her the prizes and the respect. He behaved as though he thought he was a member of some sort of royal family, and that his blood relationship entitled him to a share of the glory his sister had earned.

I knew from early childhood that my mother was terrified of her brother George, and I understood her fear when I was told many years later that when she was a young woman he had once held her hostage at gunpoint. (The Oamaru newspapers at the time recorded the incident.)

In fact it surprises me that it wasn't until the last ten years of his life that my mother, under the influence of his manipulations and emotional blackmail, finally said, enough is enough, and took out a police protection order against him. Until then, motivated by a strong sense of family duty and full of pity for his difficult past, she had always tried to keep in touch, offer hospitality, and help out where she could.

One of the NZ Janet Frame scholars, Patrick Evans, spurned by Janet Frame herself because of his insistence on trying to read Frame's life through her work, or her work through her life, developed what seemed like an obsession with my uncle George, as a "second best" source to shore up his speculative approaches to the Frame myth. So George did in a way manage to fool at least one person that he was the one who deserved the fame.

Like my mother before me, I reached a breaking point concerning my uncle George. One day in the late 1980s I met him on Dunedin's Princes Street. He was wearing his notorious kilt that often had led to his photograph being featured in the newspapers. The accompanying caption always mentioned that he was "Janet Frame's brother" - that's the first thing he would tell the reporter, after next asserting that it was unfair that she was famous and not him, because he could write too.

On this particular day he looked at me sideways with his sly, mean expression, and said "You're the one that got Isy's engagement ring, aren't you?" (it's a long story, but yes, my Great Aunt Isy had given me a ring, out of gratitude for kindnesses rendered). I was wearing the ring that day; to me it was a treasured family heirloom. Family myth held that it was priceless, but this wasn't true. It was pretty though.

He went on, "You've had a hard life haven't you?" I couldn't disagree that over the years I have had a few challenges to deal with. "You know why?" he continued.

He didn't stop for my answer before he declared, "Because I put a curse on that ring!"

When I told my mother later, she said, what a liar he was, and how typical. The ring he was referring to (from years beforehand) wasn't even the same ring I had been given, because there had been a second marriage before I even met the old lady.

Maybe true, but I never wore the ring again.

This is part of the dark side of fame... but then I guess almost every family has a troublesome member, at least one of them. You don't have to be famous, or even slightly famous!
Posted by Pamela Gordon at 5:37 PM