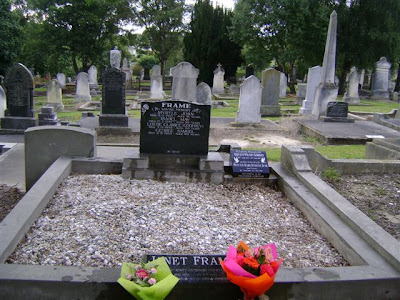 Janet Frame requested that her ashes be buried in the Frame family grave on the South Hill in Oamaru with her parents George and Lottie and her two sisters Myrtle and Isabel.

The grave had remained unmarked for many years until Janet and her sister June Gordon were horrified - and embarrassed - to be told of its neglected state. They had both moved away from the small town of Oamaru as teenagers, but together they returned to their childhood home and paid for the grave to be concreted and a memorial stone to be erected for their parents and sisters. At that time Janet and June decided they want to be buried along with their parents and sisters. Janet agreed that June's husband Wilson Gordon should also have his ashes interred in the grave along with his wife's family, and so they have been (June and Wilson's ashes were mixed together before burial, in a post-death sign of their closeness in life).

So it's an overwhelming place to visit for any of their loved ones, with seven close family members in their 'eternal rest'.

Sometimes the grave looks to me like a Queen size bed with a comfortable pebble duvet, and I like to think of everyone sleeping peacefully and not jostling too much, as in the famous scene from the Jane Campion movie, where the sisters sleeping all together in a double bed all call out "Turn!" at the same time.

Janet was certainly the Queen of Death; she knew parting and mourning inside and out. Very often her own words comfort me in grieving, especially her long magnificent poem from The Pocket Mirror "Thoughts on Bereavement", and many other poems and passages besides that one.

In the photograph of the grave above, if you look in the right hand upper portion of the snapshot, you will see that a nearby grave has a rather grand tall obelisk. That is also a Frame family grave, that I have written about before. It is the resting place of Janet Frame's Scottish-born grandparents, Alexander and Mary Frame, and also their daughter Janet Allan Frame who died as an infant.

Janet Frame's full name at birth (although she changed it later to Nene Janet Paterson Clutha) was Janet Paterson Frame. She was named after the aunt Janet Allan Frame who died as a baby and who is buried beneath the obelisk, and Janet's middle name Paterson was taken from the maiden name of her grandmother Mary Frame, also buried there. Mary Paterson was born into extreme poverty on the 7th of September 1858 in Paisley, Scotland. I don't know any other details about her origins other than that she was set to work in a cotton mill at the age of 8, and that in 1874 at the age of 18 she sailed to New Zealand alone on the Mairi Bhan, destined to work as a domestic servant.

Mary Paterson married Alexander Frame in Oamaru in 1877, when she was 21 years old. I have written about her before here. Janet Frame wrote about her paternal grandmother in the first volume of her autobiography To the Is-Land, and Michael King also provides details of Janet Frame's ancestors in his biography Wrestling with the Angel.

Below is a photograph of the base of the obelisk that stands above the earlier Frame grave: 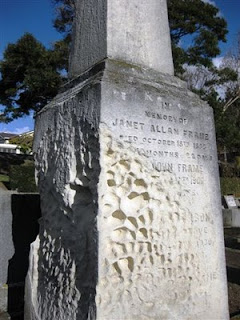 One of Janet Frame's three nieces is buried under this crumbling obelisk as it is eaten away by time. Little Zarene Rose Frame died as a baby, and was buried along with her great-grandparents Alexander and Mary, and with her great aunt Janet Allan (also an infant) who died at the age of 13 months.

"Frame picked up her copy of the Otago Daily Times to read that her brother’s daughter, Zarene Rose Frame, to whom she had written a poem the previous year, had died in her sleep aged ten months. The baby was in foster care, having been removed from Geordie and Zelda Frame’s charge on the ground that they were unﬁt to look after her." (Wrestling with the Angel, by Michael King.)

George and Zelda had two more children (a girl named 'Janet' after her aunt, and a boy named 'Geordie' after his father, in line with family tradition); and those children have also had children of their own. Geordie senior (referred to as 'Bruddie' by Frame in her autobiography) died in 1989 and was buried at his request in the Mormon Church section of the Oamaru Cemetery.  I don't know whether his family has erected a memorial stone for him, but Zarene Rose's grave remains unmarked.

Posted by Pamela Gordon at 8:05 PM

Hi Pamela - whereabouts is the grave? In the old part I take it? Next time I'm in Oamaru I'll go have a wander around.

Janet Frame's grave is easy to find. It is next to the hedge that borders the Greta Street frontage of the old cemetery. It's about 75 metres from the intersection of Greta and Tamar Streets. (Roughly opposite #77 Greta Street)

Hello I came across you blog while researching my son's family history - he is a great great grandson of Alexander and Mary Frame. It's lovely to see the gravestones (I've never been to Oamaru), and I'm wondering if you have recorded details off the others. Thanks, Adelia

Dear Adelia,
I don't know of any other Frame family gravestones at the Oamaru Cemetery - these were the only ones shown to me by my mother June and her sister Janet. The Frame grandparents were mostly based in Dunedin so I don't think there were many of Janet's father's siblings who were also based in Oamaru. To my knowledge he had only one brother living in Oamaru. The grandparents were both cared for in their last years by Janet's mother and both died in her family home, perhaps that is why they are buried in Oamaru. Sorry I don't have more answers - but the sexton at Oamaru may be able to help you.